The decision to undergo a fertility treatment includes the question, how successful the various therapy forms can be. In addition to classic methods of reproductive medicine, we would like to present you further services in detail. 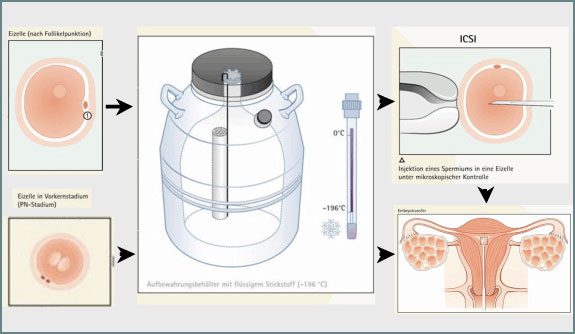 Freeze eggs and sperms.
In this therapy measure sperms, (fertilized) eggs, or testicle tissue are frozen. These can then be thawed and used in later cycles. There are many advantages of cryopreservation: If the patient doesn’t get pregnant in a treatment cycle, the frozen eggs can be used without the need to harvest new eggs. A new hormonal stimulation is not necessary. Sperms remain fertile for a long time after the extraction. Preserving sperm this way makes sense when chemo or radiation therapy is scheduled or a long absence of the partner is expected. In this way the wish for a baby can be fulfilled at a later point in life. 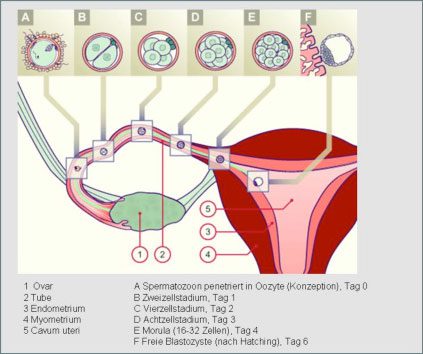 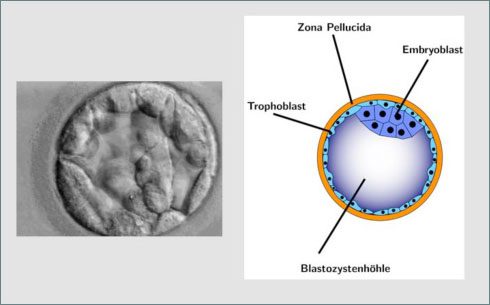 When an embryo is transferred at this stage to the uterus of the woman, it is called blastocyst transfer.
If this development is not completed, it may indicate a possible defect of the embryo with an inability to develop or to nest in the uterine lining. Only about 30 per cent of the pre-nucleus stages reach the blastocyst stage. Through the blastocyst transfer higher pregnancy rates are reached and we can transfer fewer than three embryos. Thus, the risk of multiple pregnancy is reduced. 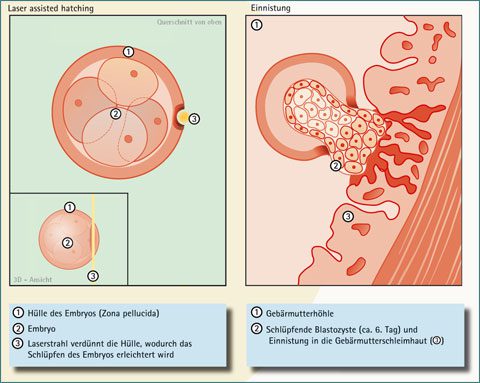 Every embryo is surrounded by a kind of “shell”, the Zona Pellucida”. The embryos must break out of this shell to embed into the endometrium which lines the uterine cavity. Laser assisted hatching is a method by which the embryo is assisted by a laser puncture to make the hatching easier. Laser assisted hatching is not covered by health insurance. If you would like to find out more information, do not hesitate to get in touch with us.
Which is the target group of Laser-assisted-hatching?
This procedure is recommended for women over the age of 35, who usually have a thickened Zona Pellucida. Women who have had several unsuccessful IVS or ICSI (in vitro fertilisation or intracytoplasmic sperm injection) are able to take advantage of this procedure too. 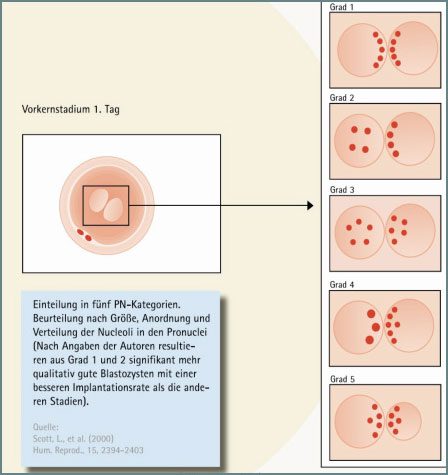 Within the scope of IVF, PN-Scoring is a method to examine the fertilised egg. Shortly before the DNA from mother and father combine (PN= pre-nucleus) the fertilised egg cells can be evaluated in sophisticated imaging procedures by using specific morphological criteria. This makes it possible to determine which PN cells possess a greater potential of forming embryos capable of development than other cells. The egg cells with the most favorable morphological criteria are elected for transfer. 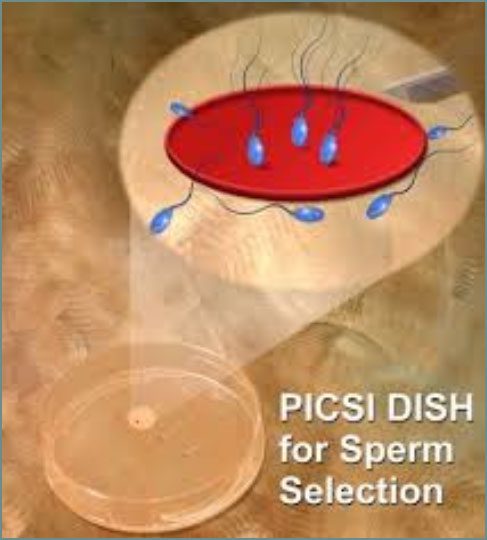 Men with a low sperm count often have sperm with damaged DNA. Then ICSI treatment is usually necessary. These unsuitable sperm with impaired development and damages in the DNA can look normal and healthy. However, if they are selected for fertilisation, this can lead to poor embryo quality and loss of pregnancy, a low fertilisation rate or failure to fertilise. In PICSI, the selection of sperm for injection into the egg is not primarily based on appearance (morphology), but on their biochemical maturity. 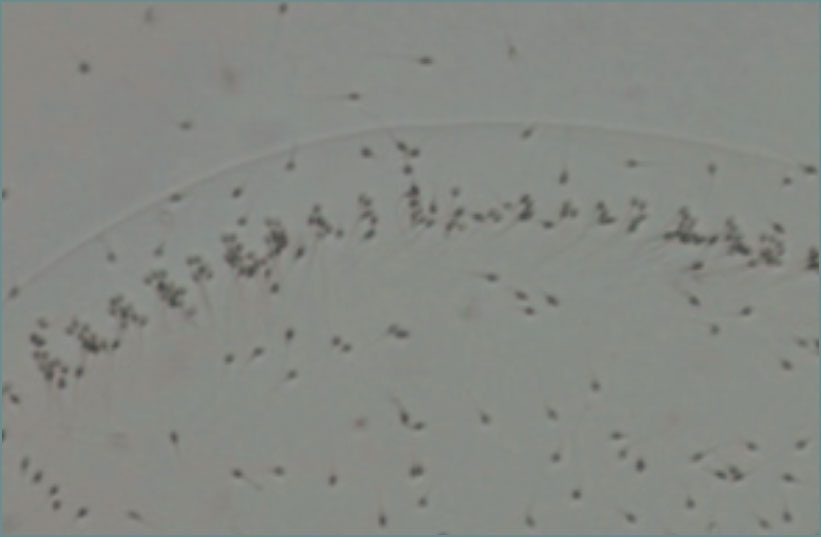 Fully mature sperm have sensors (receptors) on their heads for hyaluronic acid (hyaluran), which is an essential component of the egg shell (zona pellucida). PICSI is carried out using special shells coated with hyaloron gel, to which the mature sperm “bind”, while immature sperm continue to swim. In a second step, the bound sperm are assessed according to their morphology and the best are used for injection into the egg. Studies show that these sperm tend to have no or less DNA damage and can therefore lead to a higher fertilisation and pregnancy rate. [ ] 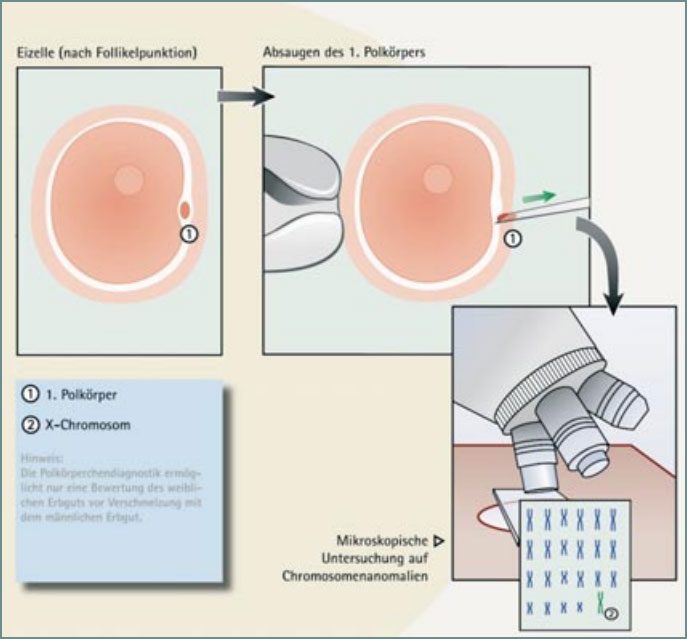 Many couples in Germany unintentionally remain childless. The absence of pregnancy or the occurrence of abortions can have various causes. These also include maldistributions of the genetic material (chromosomes), which occur naturally from time to time, but increase as the woman gets older. Such changes in the genetic material can be detected by preimplantation diagnostics (PGD), in which a cell is taken from the embryo, which is then examined for chromosome damage. Due to the Embryo Protection Act, PGD is not permitted in Germany. This is why reproductive physicians resort to a permitted “emergency solution”. They analyse the so-called polar bodies of the egg cell. The polar bodies evolve during the development of the immature egg cell into a fertile mature egg cell and contain half of the genetic material which the mature egg cell does not need. Half the set of chromosomes is, so to speak, “disposed of” in them. However, this examination method only records genetic or chromosomal changes in the maternal genome. The paternal genome is not examined. [ ] 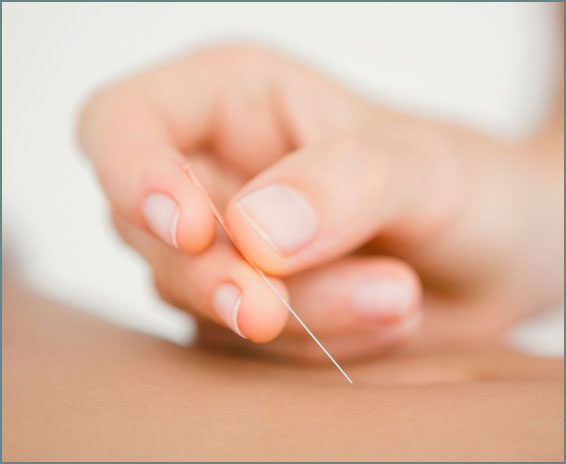 We offer acupuncture in our centre as an accompanying procedure for unfulfilled childlessness, especially for IVF and ICSI. Acupuncture is part of Traditional Chinese Medicine (TCM) and has been used for thousands of years. The human being is considered as a whole. Soul and body are brought into harmony by the stimuli, which are produced by attaching the needles to certain body parts. Here our patients are treated immediately before and after the embryo transfer with a treatment concept proven by studies. These studies report an increased pregnancy probability of 10-15% for IVF treatments with accompanying acupuncture. [ ]